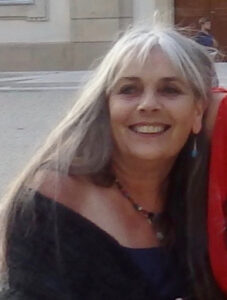 My painting has been many things over the years,

a meditation
a driving passion
a quiet place of my own to go to
a way to make a living
a release
an obsession
a drug
an indulgence.
an escape

Without my painting and the flow of the brush, I am stuck in the “Real” World.

JenniferTaranto was born in Melbourne, Victoria in 1957, and first discovered her passion
for painting at 8 yrs of age. She studied at Brighton and Prahran Technical Colleges in
Melbourne.

In 1980, Jennifer moved to the far north of NSW where she worked doing illustrations for
screen printing, and started illustrating children,s and botanical books including
– “Key Guide to Australian Trees_249 Species” by Len Cronin _Reeds Publishers.
– “Exotic Tree Fruit for the Australian Home Garden” by Glen Tankard_Nelsons Publishers.

In 1988 She returned to Melbourne and continued to illustrate books, and worked for a
graphic art studio, doing designs for tourism and marketing.

1989 Jennifer had her 1st Solo Show at the Watermark Gallery in Elwood. Victoria.

1991 She worked for the Performing Arts Museum in Melbourne, painting sets.
She also worked with National Gallery of Melbourne, Australia and continued illustrating books for Macmillan,s, Reeds and Rigby,s Publishers.

1999 She moved the Adelaide Hills where she exhibited with the Hahndorf Academy,
SALA_The South Australian Living Artists, .. and Driden Fine Arts in McLaren Vale.

In 2010 I went into partnership to run the Byron Bay Gallery.

In 2019 I had a solo show in Byron Bay and was introduced to the Australian ambassador of the Mondial Art Academia.. . and invited to join them. This is a world wide artists website based in France. I was accepted into the Academy and am now listed as one of their painters.
Since then, I have had various invitations to exhibit in Europe.

In 2019 I exhibited in the Biennale in Venice .